Do you love to share your stories, too? Tell us why and get your content featured in this awesome site.

Tour Titans is a blogsite for travel bloggers and anyone who wish to get off the stress of life. Created by travel enthusiasts for wanderlusts, hopeless romantics, happy-go-luckies, introverts, to the most sanguine of people. Thank you for visiting our site.

Taylor Swift has evolved intensely throughout her career. Ten years ago in 2008 we were singing her songs of country and ballad that carried our hearts to its utmost sentimentality. Today, we still do listen to her Pop-Rock/Hip-Hop tracks. But let’s be honest, those who witnessed her first five years miss the country Taylor, especially me.

It was back in 2008 when I first heard Teardrops On My Guitar. A friend from high school recommended it. It was an instant obsession with Taylor Swift. During that time, none of her songs were heard on local radio channels. There was only Youtube and everyone’s pirate buddy Limewire to take me in her world of modern-classic melodramatic pieces.

I remembered playing non-stop with a few of her first songs such as Our Song, Come in with the Rain, and Picture to Burn. It was only until college – the sweet sixteen years of my life – that the fearless album became available in the Philippines right after Love Story became a hit. I was young and I did not really get much of the songs, no love interests to dedicate them to and no heartbreaks to feel just yet. But in my creative mind, I kind of felt the words beyond the music.  It’s the reason I loved her and her work.

In this blog, I want to recall what I felt back ten years ago and compare it to what I feel today that I am a grown up and made it through the early stages of adulthood. The past ten years have been challenging for me, I’ve suffered too many heartbreaks. You know, as most of my generation did. Now, it’s a different feeling to listen once again to these tracks. The lyrics became more meaningful. I know I’m not the only Swiftie who have felt this way. So, for all the hopeless romantic Swifities of my generation. This is for you.

1. I wonder if he knows he’s all I think about at night

It did not have to be our best buddy, no. Even with just a close friend or a school buddy we had a crush on, listening to them talk about their romantic interests made us think of the words “If only you knew I have a huge crush on you.” They were the feeling of puppy love. Today, our colleagues, our best friends, are the ones who don’t have a clue. We tell them “Yeah, that person might also have a crush on you, go ahead and make the first move.” But, deep inside you really want to tell yourself “Maybe next time, I’ll make my move first” or “Maybe it’s about me, I’ll take my chances and wait” because you are afraid to ruin your friendship or you are still gathering up the courage to be the aggressive one, you know, ever since Teardrops on my Guitar was released. Until its too late and you find out they are already on their third week anniversary. 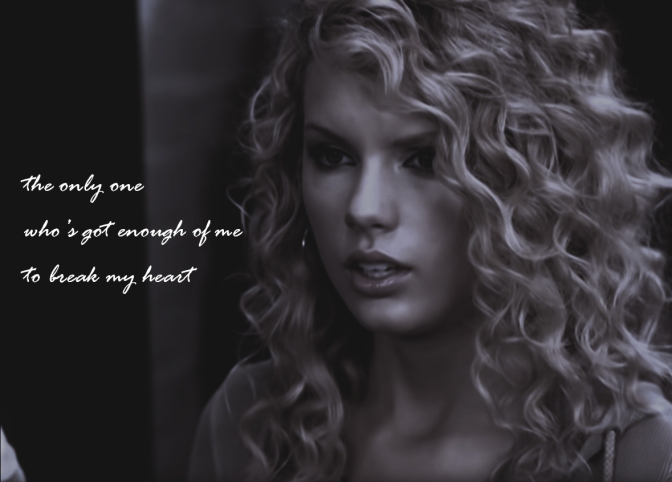 Check out genius.com’s annotation about Teardrops on my Guitar.

2. As far as I’m concerned you’re just another picture to burn

Every sentimental swiftie loves to collect memorabilia of pretty much the best and even the worst events of their lives. I like to collect as much as I can when something memorable happens. A ticket for the first movie, the receipt of the first date, even the bus ticket on a way to a soon to be cherished day. This was a resentful break-up song back then. But as time and relationships passed by, I got to realize Picture to Burn was the song I was looking for when I find out my paranoia was right and there was not really a promise of ‘only me and you’. All the scrap collected becomes the effigy of my past relationship (or flings), which is you know, pure trash. Even Taylor Swift realized that the angry feeling she felt was actually a pain when she looked back to this particular song.

This was the jolly song I adore the most when I think about her country days. It’s a good country song that simply talks about sweetness and innocence and just being expressive and happy. It’s the next song I knew after Drew looked at me and I fake a smile so he won’t see.

Daydreaming is a common trait among Swifties, admit that it’s true. We all dream of the perfect soulmate to come and wrap their hands around ours sing us sweet lullabies and rest on their chest until morning. Our Song reminds us to remain hopeful, for those singulars who hasn’t yet able to find their true love.

4. So I start a fight cause I need to feel something

This is for me is the saddest – UGH – song before White Horse. There is so much pain that you don’t have to be a damaged one to feel it – unless you’re a callous robot. Every line is full of heartbreak, agony, and bitterness. Listening back then, there was only empathy. A painful vibration from someone we knew who dealt of losing their relationship. Today, oh no, the heartbreaks are coming back as I type these words. As if it was just yesterday when I felt the tragic betrayal of promises. It’s mental torture to repeat this song after a breakup. I wonder how many Swifties like me have survived Cold As You after a terrible split.

My favorite line in this song is “So I start a fight cause I need to feel something, you do what you want cause I’m not what you wanted.” It captures such a grave feeling of abandonment. It’s something I/we don’t ever want to feel again.

5. She’s never going to love you like I want to

Taylor Swift has always been a creative songwriter. Even before she had a real relationship, she thought of love as if there was never a second chance of loving again. Invisible is a nice example of how easily Taylor get attached to someone. I bet there are a lot of people like who are clingy, overly attached, partner-magnet, whatever. What’s bad is when we get thrown over, emotions flood on our life. It affects us tremendously. But, the good quality about people like us is when we find the one, there is really no one else we turn our hearts into. We just give it all. Or is that also bad?

Have you heard of the sweetest story ever sung? Well, at least by Taylor Swift. This is it. Ever since I heard this song it has not changed the way I feel about finding true love and spending only forever with that person. Taylor was inspired by an old couple who lived next door to them when she wrote this song. Mary’s Song keeps us hoping and dreaming and longing for the best story of our life. We all wish that someday, we would also have the scene where “I’ll be eighty seven, you’ll be eighty nine, I’ll still look at you like the stars that shine in the sky.”

It’s true that music is the language of the soul, and yeah, those who do not listen to any song does not have a soul. Kidding. We all have our favorite artists which we find relatable. They make our lives easier and our emotions steady and well lit. You don’t need to be a Taylor Swift fan to relate to her songs, but let’s admit, we all felt what she felt. We just have different approaches when we do encounter them.

Let’s all agree that Taylor Swift is still one of the best songwriters ever. She has inspired millions of people around the world. Her story is our story. How about you? What is your favorite Taylor Swift country song?

*all images in this blog is a screen capture of her publicly released videos, which I edited for this article.

An aspiring professional writer. He works as an IT guy in the public sector. His blog is a diary of memorable travel experiences and some other. He's a dreamer of a sort. Believes that the universe is as wide as infinity and all things we can think of exist somewhere in between. View all posts by Paw Jacinto

2 thoughts on “The Country We Miss About Taylor Swift”

This site uses Akismet to reduce spam. Learn how your comment data is processed.